I was born in the 60's and Dr. Spock was the child rearing book that families refered to on how to raise your child. One of the tenents of Dr. Spock is that when your child is alone or crying to let him or her cry themselves to sleep. From an early age I was sensitive to my environment and surroundings. I can remember crying for hours and hours in my crib standing up as a toddler and no one would come to tell me that everything was ok. Well my mom or dad would but I still cried and then they left. Nowadays I hear they say to bring your child into the bed with you and then when they are sleeping to slip them back into the crib.  I am not blaming my parents they did a great job I just want to expain things as I understand them.

I was frightened as a child of vampires,aliens and bigfoot. Any sound at all would terrify me and I would hide under the covers at night trying not to move. I could sense a presence a psychic force and it made it's presence known more at night and I imagined the worst things lurking on the edges of my awareness. In my later years I figured out what it was this other awareness but that is another story. Into the psychic field my terror would ebb every night building and building until when I was 6 years old something answered.

My mother tucked me into bed and I said the ritual response I always said to her because I knew I was about to be scared and for some kind of normalcy "goodnight,sleep tight and don't let the bed bugs bite" then when she was gone I prayed The Our Father and for my family to be safe and for my mother and grandmother each to live to 99 years old. Then I felt a presence so I started to feel scared as I always seemed to and then after my fears ratcheted up to extremly high levels I saw an apparition at the foot of my bed. 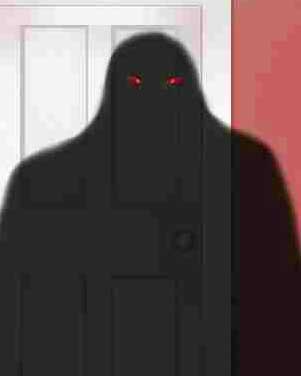 It was a being in black all made out of shadow with no distinct edges to it's form with red eyes looking into my own. It's eyes were hypnotic and penetrating. I believe now that I may of summoned it by my terror leaking into the psychic field somehow but back then I had no idea what it was all I knew was I was paralized by terror. The being crept closer and seemed to flow towards me. I sat up in bed instead of looking down the bed with the sheets pulled to my chin and then I was paralized for real. I could not move or yell out or scream. It flowed behind me and reached up and with it's hands openned my (what I know is my 7th chakra) head and it felt like it was riffling through my either memories or past lives or somehow accessing me. 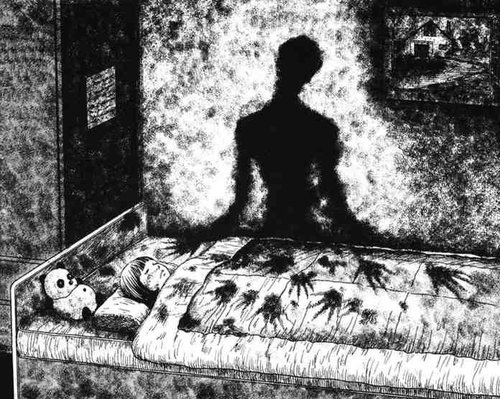 Then things got worse as I could not see my room anymore. Everything was black and I was bodiless. I looked and there were the red eyes staring at me from every direction. Like the stars in the sky there were red eyes everywhere. It was like I was in a stadium and all the seats were filled with people with red eyes staring at me from far away. As I orenitated my awareness whichever way I looked the stadium of eyes reorenitated to my perception. I swung my perception 180 degrees and I was still in the center of circle of red eyes trailing away as far as I could see.

I summonded my will power and chose a pair of red eyes as far away as a football field and willed those eyes to myself. I stared and stared and our wills clashed this might be my soul that we were fighting over I had no idea but I knew I had to win and escape this trap,I had to get back to my room and my family and my life. The red eyes loomed larger and were burning with hell fire. I would not give up and brought everything, my entire being and soul to bear. I heard a loud commanding voice that came from every direction that I now take for the voice of The Lord  say " YOU ARE THE CHOSEN ONE!"... I came to myself leaning to the right bending over a little still sitting up "NOOOOOOO!!!!" I yelled into my now empty room.

The red eyed being was gone and I was myself again. This was a tramatic experience that I slowly forgot about and I would not remember fully until a series of events triggered the memory in the year 2010 but that is another story.

This entry was posted by Victor in category Healing and tagged shadow people, the chosen one, red eyed shadow people on Monday, 27 March 2017 23:58 in blog Victor Hamsa's Blog subscribe
Leave a reply